An interesting case was released out of the 9th circuit recently (Orange County, Florida) that dealt with a DUI Motion to Suppress regarding the Accident Report Privilege.

WHAT IS THE ACCIDENT REPORT PRIVILEGE?

The “Accident Report Privilege” is a legal privilege that protects a person who is speaking to law enforcement during a traffic accident in order to encourage people to truthfully and fully report the facts surrounding traffic accidents. Florida Statue § 316.066(4) provides that “accident reports made by persons involved in accidents shall be without prejudice to the individual reporting” and that “[n]o such report shall be used as evidence in any trial.”

HOW DOES THE ACCIDENT REPORT PRIVILEGE APPLY TO DUI CHARGES?

WHY WOULD THE POLICE HAVE TO READ YOUR RIGHTS?

The purpose of a police officer advising you of your Miranda Rights is to let you know that a  criminal investigation is starting and that the officer will be asking you questions. Prior to being interrogated, a person who is in custody must be clearly informed that he/she has (1) the right to remain silent, (2) that anything he/she says can and will be used against him/her in a court of law, (3) that he/she has the right to consult with an attorney prior to and during any questioning, and (4) that if he/she cannot afford an attorney, one will be provided for him/her at no cost.

SO WHAT HAPPENED IN THE CASE?

A person who is facing DUI charges in Florida should contact a criminal defense attorney who is familiar with DUI cases and has filed motions to suppress. A person who is placed under arrest and interrogated without being read Miranda Rights may be able to have his/her statements suppressed (or thrown out). However, that does not mean the case has to be or will be dismissed. Anyone who has questions regarding their particular case, or Miranda rights in general, should contact a criminal defense attorney.

Casey Reiter is an associate attorney at Greenspoon Marder in West Palm Beach, Florida, practicing in the areas of Criminal Defense and Marital Law.

An interesting case from the 1st DCA was published this week and it provides a good discussion relative to my recent blog “Miranda Warnings – Infographic,”

In the case of State of Florida v. Parker, the 1st DCA revisited the important issue of constitutional rights during an interrogation of a suspect. In that case, the suspect was being questioned by police in connection with a burglary with battery charge (in addition to other charges). Burglary-battery, or “burg-batt,” is a first degree felony in the State of Florida, punishable by up to life in prison, and found under Florida Statute 810.02.

During the questioning, the following questions and answers (at issue) allegedly took place:

Suspect: “Can you just tell me if I need to get a lawyer or something?”

Officer: “Listen, that’s your right. But what I’m interested in is the truth.”

At this point, the suspect allegedly made incriminating statements.

Suspect “Is there a lawyer in the building?”

Officer: “No, you would have to call one.”

The suspect was ultimately placed under arrest. During his case, the suspect (now defendant) filed a motion to suppress his incriminating statements, arguing that the police officer had violated his constitutional rights by not giving him a straightforward answer. The law regarding this issue requires police officers to stop the interview when a suspect asks a question concerning his or her rights, and make a good-faith effort to give a simple and straightforward answer. Once the officer answers the question, appropriately, the officer can continue the interview unless the suspect invokes his her her rights (such as his or her right to remain silent and right to counsel). However, Florida courts have held that when an officer gives an evasive answer, skips the question, or talks over the suspect, the officer has violated Florida’s Constitution and the US Constitution, and any incriminating statements obtained as a result of the constitutional violations may be suppressed as coerced.

In this case, the Court found that the officer had in fact made a good-faith effort to appropriately answer the suspects questions regarding his rights. As a result, the incriminating statements the suspect made about himself were admissible in trial.

Interestingly, the Court also mentioned in its ruling that the suspect’s question about “whether there was a lawyer in the building” was not an unequivocal invocation of his right to an attorney. That is an example of why it is extremely important for anyone being questioned by police to know his or her rights so that he or she can properly invoke them if he/she chooses to do so. Many people do not know their rights or the steps they have to take to invoke them. An unclear question regarding a suspect’s rights will not be sufficient to invoke them. A person who wants to stop the interrogation to speak with a lawyer has to clearly make the request. Anyone who has questions regarding their rights during a police interrogation should contact a criminal defense attorney.

We see police officers give Miranda Warnings to people they are arresting on television all the time, but what are they really?

Miranda Rights were developed after the landmark Supreme Court Case of Miranda v. Arizona in 1966. In that case, the defendant, Miranda, was arrested for kidnapping and rape. After being interrogated for two hours by police officers without being advised of his rights, Miranda signed a confession. Miranda’s lawyer argued that the confession was not voluntary as a result, and should have been excluded as evidence from the trial. The US Supreme Court ultimately agreed, and found that the defendant’s Fifth Amendment right against self-incrimination and Sixth Amendment right to a lawyer had been violated. Interestingly, Miranda was later retried and convicted.

In its ruling, the US Supreme Court stated that prior to interrogation, a person who is in custody must be clearly informed that he/she has (1) the right to remain silent, (2) that anything he/she says can and will be used against him/her in a court of law, (3) that he/she has the right to consult with an attorney prior to and during any questioning, and (4) that if he/she cannot afford an attorney, one will be provided for him/her at no cost.

Subsequent to the Miranda decision, it became necessary for police officers to “Mirandize,” or read a person’s Miranda Rights to them, prior to an interrogation. Although we commonly see police officers reading Miranda Rights on tv, it is not always necessary for them to do so. There are only certain, limited scenarios in which an officer has to warn a person of his/her rights, specifically: when that person is in custody and being interrogated. Many people believe that their criminal charges can be “thrown out” because an officer didn’t read Miranda. However, if a person voluntarily answered questions during a consensual encounter with police officers (for example, an officer walked up to the person on the street and asked them what they were doing), those answers can be used against them later. A person who is arrested, handcuffed and taken to jail does not have to have their rights read to them unless the officer begins asking that person questions. If the arrested person starts talking on his/her own in the back of the police car, without being asked questions, all of those statements can be used against the arrestee. Further, suspects who are informed they are free to leave and not under arrest do not have to be Mirandized, and any confession that person gives can usually be used in court. Finally, even if a person has been read Miranda Rights, that person can still waive those rights and have any subsequent confession used against them.

A person who IS placed under arrest and interrogated without being read Miranda Rights may be able to have his/her statements suppressed (or thrown out). However, that does not mean the case has to be or will be dismissed. Anyone who has questions regarding their particular case, or Miranda rights in general, should contact a criminal defense attorney.

The infographic below provides a colorful layout of Miranda Rights as they are typically read. 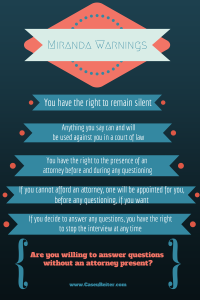 Growing up, children are taught that police officers are their friends. If a child needs assistance, he or she should feel comfortable asking a police officer for help. In cases involving young children, this suggestion is typically good advice. However, as children become young adults, the nature of police interaction becomes more dangerous. Unless reporting a crime committed against them, adults will typically learn that talking with the police will not be beneficial, and lawyers usually recommend against it. This is not to say that all police officers are inherently bad; there are certainly good police officers who are conscious that it is their job to serve and protect. However, when a person is being investigated for a crime, talking to a police officer will almost never help.

Whenever the police show up at someone’s home, it is not to deliver good news. Police officers rarely, if ever, go to someone’s home just to say hello and see how their day is going. Usually, if the police appear at someone’s house or call on the phone, it is because they suspect that person has committed a crime. Even when an officer walks up to a person on the street, it is usually not to have a pleasant conversation. Instead, the police are trying to have what is called a “consensual encounter” to try to get more information and, they hope, give them probable cause to make an arrest. At this point, a person does not have to talk to the police; it is within the person’s rights to politely decline the encounter and walk away.

However, if the police have moved beyond a consensual encounter and are now detaining that person, it is because the officers believe that have enough evidence to make an arrest. At this point, no communication with the officers will help; instead, it will only create more evidence against the detainee. It is very rare that a detained person will be able to talk his way out of an arrest. At the point of detention, officers are typically convinced that person has committed a crime and they will not believe a denial. Even the most eloquent and clever conversationalist can fall into this trap and inadvertently give police officers more “ammo” for whatever charges they plan on arresting the suspect for. As is often seen on TV, Miranda warnings include for a reason that “anything you say can and will be used against you.”

In the United States, people are supposed to be presumed innocent until proven guilty. Every case is different, but in the criminal justice world, the same rules should equally apply to the innocent and guilty. If you are being investigated for a crime,  you should contact a Florida criminal defense attorney regarding your specific case.  The hiring of a lawyer is an important decision that should not be based solely upon advertisements.