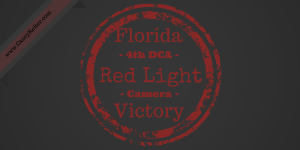 A significant ruling from the Fourth District Court of Appeal this week may have a large impact on the red-light cameras, not only in Broward and Palm Beach Counties, but throughout the State of Florida.

The 4th DCA issued a 9 page opinion on Wednesday, dismissing a traffic ticket issued in 2011 as a result of a red-light violation. In its ruling, the court held that the city of Hollywood, Florida cannot delegate its legal authority to issue traffic tickets to a private, for-profit third party – in this case, American Traffic Solutions (ATS). ATS is a Phoenix, Arizona company that administers a majority of the red light cameras throughout the State of Florida. Basically, after someone runs a red light, the red-light camera sends the picture and video of the violation to ATS, who then reviews the video to determine if a violation occurred and then sends the information to the applicable Florida Law Enforcement agency.

In its ruling, the Court said:

. . . Florida Law does not grant the City any authority to delegate to a private third-party vendor the ability to issue uniform traffic citations. The City also lacks the lawful authority to outsource to a third-party vendor the ability to make the initial review of computer images of purported violations and then use its unfettered discretion to decide which images are sent to the TIEO, and which ones are not. The City improperly delegated its police powers when it contractually outsourced its statutory obligations to a for-profit, non-governmental corporation.”

The full decision can be found on the 4th DCA’s website, here: 4D12-1312-City of Hollywood, a political subdivision of the State of Florida v. Eric Arem

View all posts by caseyreiteresq