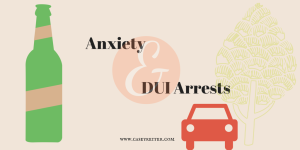 One of the most common observations made by officers during a DUI stop is that the driver was weaving in his or her lane.

However, when officers make this observation, they are often following behind a driver. The “normal” response for a driver who is being followed by a police officer is to become nervous and anxious. Even people who have done nothing wrong find themselves double checking their mirrors and slowing down when they become aware that a marked police vehicle is behind them. The longer the officer follows, the more nervous a person typically becomes; the more nervous a person grows, the more that person checks his mirror, taking his eyes of the road, and drifting in his lane.

Undoubtedly, the result is weaving, drifting, and attempts at correction, which can create the appearance that the driver is under the influence of alcohol. Meanwhile, the police officer has most likely been recording the entire incident on his in-car camera, capturing what he believes to be evidence of a drunk driver to present in court later.

If a driver has been pulled over, now it is typical for the driver to become even more nervous. A person who has just been followed by a police officer, who has been exposed to the flashing lights and sirens, and who has been approached by an officer in full uniform may start sweating, stuttering, and appear flushed due to an increased heart rate. The person may fumble with his or her wallet when asked to present a driver’s license and proof of insurance. On top of this, the investigating officer likely already believes that driver is under the influence based on his or her driving pattern. So now, the officer notes bloodshot eyes as an indicator of impairment, when they could have simply been dry from the air conditioner, or tired from driving. If the person has had a drink, the “evidence” keeps piling on. Now there is an “odor of alcoholic beverage” on the driver’s breath, and an admission that the person was drinking if he responds to the police officer’s question of “have you been drinking tonight” with “I only had two drinks a couple of hours ago!”

At this point, the officer will typically ask a person to exit the vehicle and perform field sobriety exercises. A driver who does not know the exercises are voluntary may perform the exercises, perform poorly (maybe the driver naturally has poor balance, or an injury, combined with being anxious), and ultimately be placed under arrest for driving under the influence without even the results of a breathalyzer. If the person refuses to submit to a breath test, that refusal will be used as additional evidence against the person, and in a trial, the prosecutor will be able to argue that the driver refused the breath test because he “knew” the results would be above the limit (even if that wasn’t the reason for refusal).

Obviously, not all DUI arrests are a result of an encounter between a nervous person and an overzealous police officer. However, many of the standard “indicators of impairment” can be created in the scenario described above and cause the arrest of a person who was not actually under the influence to the extent his or her normal faculties were impaired.

There are many defenses to a DUI charge, and anyone who is facing a DUI in Palm Beach County should contact a Palm Beach Criminal Defense Attorney to discuss his or her potential defenses.

View all posts by caseyreiteresq